Say what you mean, mean what you say: New research highlights challenges in the language used by ombuds 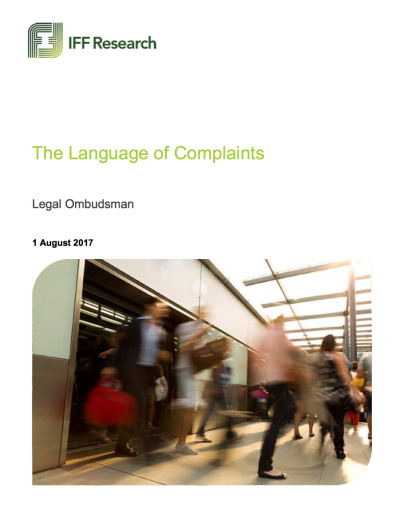 A new report has been published on research on language used in complaints handling. The Language of Complaints, produced by IFF Research, was commissioned by the Legal Ombudsman to help understand how language affects consumers’ behaviour and choices and identify better practice in the use of language. The report highlights the use of jargon in complaints responses – including ‘remedy’, ‘premature’ and ‘out of time’ – which can cause confusion or appear meaningless and add to ‘the accumulation of technical language that the customer will have encountered in their complaint “journey”.’

The researchers explored the impact of language used in both written and oral communication by legal services providers and the Legal Ombudsman. They consulted with staff at the Legal Ombudsman and also carried out 15 face-to-face interviews and four focus groups with members of the public, both those whose complaint to the Ombudsman had concluded and those who had used a legal services provider but not complained.

Responses suggested that, generally, communications were clear and straightforward and that the Legal Ombudsman’s language is an improvement on that used by legal services providers. There were a number of areas, however, in both written and oral communications where improvements could be made.

Although it is clear that people interpret language in a variety of ways, it is useful to understand better how common phrases used by redress mechanisms can convey the opposite of what is intended. For example:

‘The phrase “we will look at the facts in each case” was felt to convey the Ombudsman’s impartial approach particularly well, while the idea of the Ombudsman “weighing up the comments” from the customer and the service provider meant that several non-customers interpreted the Ombudsman’s role as being like a pair of scales.’

Other comments include that the term ‘impartiality’ implies ‘sitting on the fence’ and being toothless to enforce recommendations, and that ‘premature’ (used in relation to a complaint that has not yet gone through the internal complaints procedure of the provider) is associated ‘with small babies or with a sexual context’.

Lack of clarity on ‘informal’ resolution

It is interesting to note that among the problematic language identified is ‘informal resolution’: the research identified that the steps involved in taking a complaint to an ombud are not as clear as they could be, and that for some interviewees:

The report explains the process of ‘informal resolution’ as follows:

‘Once a complaint has been accepted, it will be passed to an investigator who will listen to both sides, look at the facts, weigh up the evidence and take a view. If a case is resolved at this stage, it is resolved ‘informally’. The Legal Ombudsman aims to resolve complaints this way; currently, approximately 30% of cases are resolved like this.’

‘…several of the calls were felt to be overwhelming and hard to understand. This was due, in large part, to their lack of structure which felt baffling to the customer: for example, the informal resolution with remedy call started with the staff delivering a decision, when later it became apparent that this was actually a first offer (“It began as a decision, then it became a bartering thing.”)’.

‘…there was a lack of clarity among participants about the different stages of the process, and, in particular, what the difference between a “preliminary” and “provisional” decision means in practise. Few customers were certain whether they had received one or both (with one or two believing that the preliminary decision was when the Legal Ombudsman assesses your case and decides to take it on, and one or two others believing that the preliminary decision they had received from an investigator on their case was in fact a ‘final decision’).’

The researchers quote a complainant whose complaint was not upheld, describing the informal process as ‘quick and dirty’:

‘A first round, they would have looked at a quick and dirty response that says, “Sorry, here’s £200, go away”.’

In terms of redress, ombuds often use the term ‘remedy’, but this was seen by some interviewees as ‘medicinal’, as if a dose of remedy would fix the problem. These interviewees argued that, where a financial remedy is being recommended, ‘compensation’, ‘cash settlement’ or simply ‘settlement’ would be more appropriate.

Job titles within ombud organisations were also potentially challenging in that, although they appeared to confer a welcome right to escalate a complaint (from, for example, investigator to senior investigator to Ombudsman), it also felt to some like scaling a great height, and in doing so it implied that the investigator’s opinion is less valuable.

The findings give valuable insights into the perspectives of users of redress mechanisms, including but not limited to ombuds. They also give pause for thought for anyone involved in the design of grievance and complaint procedures.