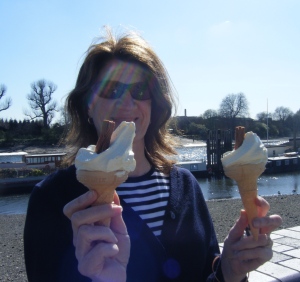 It seems that ice cream season is coming around again, so let’s check the latest figures on the gender pay gap and see how the ombuds are doing in terms of levelling out the discrepancies in scoop size in their employees’ ice cream cone payslips.

Last year ombudsresearch looked at how ombuds are doing on the gender pay gap, following the implementation of the Equality Act 2010 (Gender Pay Gap Information) Regulations 2017. Under that Act, all private-sector and most public-sector employers with 250 or more employees are required to publish data on the differences in average hourly pay for men and women in their organisation – the gender pay gap.

As we said in that post last year, the gender pay gap identifies potential structural inequality, not inequality or discrimination at an individual level. Reporting on the gender pay gap reveals patterns and trends about the proportion of women in senior positions, which in turn gives insights into potential barriers for women in the workplace, including the effects of prejudice and unconscious gender bias and of caring responsibilities (for children, elderly parents, etc) still primarily being taken on by women. Identifying a gap in pay can help organisations see that there’s a problem that needs addressing.

Given that ombuds have a key role in ensuring that organisations and public bodies act according to principles of equality, it is revealing to see how they themselves rank in terms of gender pay equality.

The latest figures have been analysed and published by the BBC in a handy online checker. As with last year’s figures, the returns cover only companies of more than 250 employees, which in the UK ombud world includes the Financial Ombudsman Service, the Parliamentary and Health Service Ombudsman and Ombudsman Services. All three are below the latest average of an 8.35% pay gap in favour of men, but the differences between them are interesting.

A gender pay gap is not the same as equal pay, and having a gender pay gap is not evidence of intentional discrimination. The complex causes of a gender pay gap are discussed in our previous post on last year’s figures. We noted that although the figures for ombuds were at or below the national average, the problem needs to be recognised and addressed across the organisations. Training, such as training in unconscious bias, can help address the pernicious prejudices that we all have and that can manifest themselves in recruitment and promotion decisions. Organisationally, it is important to identify the factors leading to the gap and to review approaches to recruitment, retention, promotion, job grading, and coaching opportunities.

Most importantly, as we stated last year, a shared commitment among ombuds to eliminating the gender pay gap would be a great start.