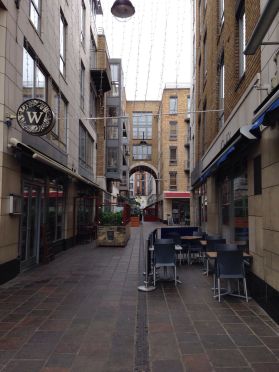 One of the difficulties with mapping work is that the landscape tends to change, often quite rapidly – something that’s as true of cities as of research. The ombudsresearch team’s visit to Dublin last week included a brief tour of the city’s ‘Italian quarter’, a new(ish) area with housing and cafés created by politician and developer Mick Wallace, including a new pedestrianised street, Blooms Lane, where no street existed before. (The street doesn’t appear on all maps of the city – but it does feature a unique mural by artist John Byrne, ‘Dublin’s Last Supper’, with portraits of several of the city’s notorious inhabitants.) 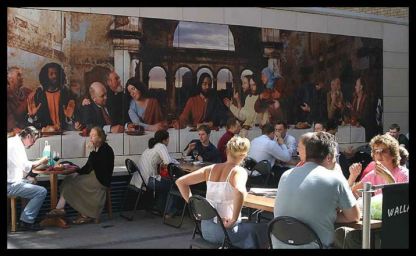 The terrain of ombuds complaints-handling practice has also changed since we mapped it in our study, something we learned at the Irish ombudsman staff conference on 19 February. We were invited to present our study of the use of informal resolution approaches by ombuds in the UK and Ireland, our Nuffield-funded mapping research published in autumn 2014 (the report is available here: The use of informal resolution approaches by ombudsmen in the UK and Ireland ). We were warmly welcomed by Kieran FitzGerald of the Garda Siochana Ombudsman Commission (GSOC) and Peer Tyndall, Ombudsman for Ireland. 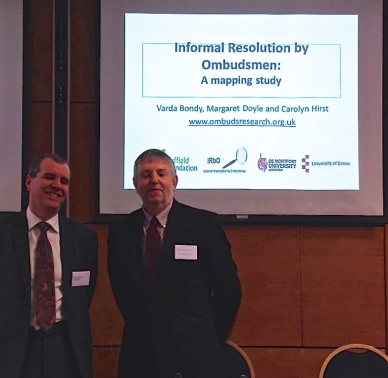 Before the conference, we were invited to meet with Nuala Ward of the Ombudsman for Children. After marveling at the enormous bean bags and cinema for visiting children, we discussed with Nuala the implications of greater use of informal resolution approaches in terms of achieving justice for children and young people in Ireland. We were also impressed with the scheme’s own initiative powers, especially given the obstacles many children and young people face in making complaints. 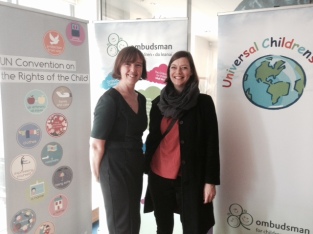 Afterwards, we presented our research to the gathering of staff from the many and varied ombuds schemes and commissioners in Ireland, all of whom had generously responded to our study. Attendees were not shy about challenging our findings. It was fascinating to discover, for instance, that the Garda Siochana Ombudsman Commission (GSOC), which handles complaints about the police, no longer uses face-to-face mediation between complainants and officers. It had been one of the five schemes (three of which are Irish schemes) using such an approach, albeit for a small percentage of complaints, but it found difficulty in getting consent from the parties.

One of the other schemes using face-to-face mediation is the Press Ombudsman – again, for a very small percentage of its complaints. That scheme raised interesting issues for us about terminology, because they use ‘conciliation’ to refer to their formal process, and ‘mediation’ as the informal process. The confusion about terminology is an issue that runs across the entire project and is something we’ve commented on specifically before. Why are schemes using different terminology for the same processes, and the same terminology for what appear to be very different processes? Bernie Grogan of the Press Ombudsman suggested that we might have been better off establishing what the process terminology (mediation, conciliation, adjudication) means before inviting responses to the questionnaire so that people would refer to the same terms.

Another suggestion from Peter Tyndall, Ireland’s national ombudsman, was that we could have asked respondents to describe what they do, and then develop a typology from the responses, rather than starting with definitions. This is similar to an approach taken by researchers from Queen Margaret University in a 2014 study of dispute resolution models used by ombud schemes internationally. In that, the processes were grouped into categories of evaluative, facilitative and conciliatory approaches. This helpfully avoided getting caught up in differing definitions.

We’ll take all those suggestions on board if and when we take this research further. One of the points that came across very clearly is that what’s needed is a more in-depth, up-close observation of what ombudsfolk actually do. What are the techniques and practices they use to resolve complaints early and informally? What do the parties feel about the experience? How do the outcomes compare to those decided following investigation?

A lively discussion followed our presentation. Participants discussed the possibility of a one-stop shop, or common portal, for complainants to access and be directed to the appropriate ombud scheme. Others mentioned the need for opportunities for training and development that are tailored for the staff of the schemes in Ireland, with a particular focus on investigation techniques. A representative from the Financial Services Ombudsman explained a recent change in their informal resolution approach, with more focus on resolution at an early stage. And a representative from the Ombudsman for Children noted that ‘resolution’ means different things to different people – for that scheme, resolution that is in the interests of the child is paramount. That scheme is also unusual in that it is seeing an increase in complaints, while others are seeing a decrease.

It was a great privilege to be in a room with so many knowledgeable and expert individuals. Although the terrain has shifted somewhat since our study, there is clearly an appetite to look more closely at the place of informal resolution in ombuds practice.